Not a member? Register now.

The original article, written by Jana Igunma for the Southeast Asia Library Group, is available here.

Local knowledge plays an important role in people’s everyday lives and helps to maintain health, wealth and stable communities. Although in the past decades, a preference for transmitting local knowledge orally or through electronic and virtual media has evolved in Thailand – as everywhere else – the preservation of local knowledge in written form is essential in order to transmit it to future generations. Presently, the contents of mostly unique manuscripts are being explored and investigated to preserve and to reconstruct partially forgotten traditional local knowledge, and numerous initiatives aim at making this knowledge available electronically and via the internet by way of digitisation.

The diverse and flexible traditional formats for storing and transmitting local knowledge are generally known as “manual” (tamrā), “treatise” (khamphi), or “handbook” (khu mü). All kinds of information, accounts, procedures, methods and rules may be encoded in these three formats, and be stored in the form of palmleaf manuscripts or paper folding books. The three terms were sometimes used interchangeably. Although some scholars would insist on distinguishing between the three formats, in practical usage their semantic ranges overlap.

Generally, knowledge encoded in the manuscript format was dignified by the Sanskrit term for science, sastra (sāt in Thai), to the extent that tamrā and sāstra in many instances are used synonymously. In its original meaning, the term sāstra was used for a written codification of rules in order to regulate certain human practices and activities.

At the courts of Thai kings, as well as at the courts of regional tributary rulers and allies, great value was placed on the possession of knowledge in the form of sāstra. This knowledge often was related with acquiring and exercising power, with waging war, with managing the ever shifting balances of allies and enemies, and with the art of governing. Brahmans (in Thai phrām) knowledgeable in the sāstra and adept at providing these aids had been retained in the Thai courts at least since the beginning of the Ayutthaya period. Knowledge of magic spells, incantations, and the creation and manipulation of magic diagrams was regarded as secret knowledge and carefully guarded from falling into the hands of enemies. Practitioners – ritual specialists, astrologers, healers, fortune tellers – claimed to know certain methods to make their spells, incantations, forecasts, or prescriptions more effective than those of their rivals. Theravada Buddhist monks sometimes also acquired sāstra, although such knowledge nowadays may be regarded by devout Buddhists as sheer superstition.

The possession of sāstra was not the preserve of the elite alone. There was, and is, a popular dimension to this knowledge. Some medical therapies, fortune-telling, magic, ritual practices and even certain aspects of astrology cannot be traced to foreign influences. Manuscripts which encode local knowledge were regarded as sacred materials, and even the possession of a certain manuscript was sometimes thought to provide protection or special powers. For long periods of time they were hidden treasures in Buddhist monastery libraries or in private and family collections in order to protect their contents and secrets. However, more and more manuscripts are being made publicly accessible in libraries, museums or institutions of higher education, or via the internet in digital form. The examples below are the results of digitisation efforts at the Bavarian State Library (Germany), the State Museums of Berlin (Germany), the Princess Maha Chakri Sirindhorn Anthropology Centre (Thailand) and the British Library (UK). 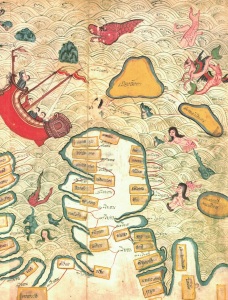 An outstanding example of Thai local knowledge is the Traiphum, a Buddhist cosmology. It is a treatise that describes the Buddhist universe in a Thai traditional understanding. Translated, it would mean “three worlds” (heaven, earth and hell), but in fact it describes many different states of existence, in which concepts of heaven and hell have various levels.

Illustrations of the Traiphum depict many facets of the visible and imagined worlds, including many subjects from Buddhist scriptures. Some Traiphum manuscripts also include fascinating early maps of Thailand and surrounding areas. The map shown above depicts the Indian subcontinent with Sri Lanka, with red lines giving the distances between certain places. The objective of those maps is not geographic accuracy, but rather to indicate important places and travel routes. Some Traiphum illustrations emphasize the real natural or imagined character of places. Therefore the seas are often filled with all types of creatures; and landscapes are sometimes attributed by mountains, rivers, trees, animals, Buddha footprints or important stupas, which are understood as marking points for geographic orientation. Places like countries, towns and islands are named in some cases. A digital version of parts of the manuscript can be viewed on the website of the State Museums of Berlin. 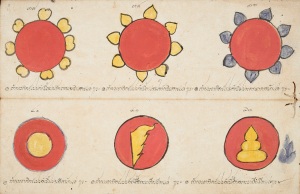 As servants of the king, Thai astrologers possessed knowledge vital to making decisions, for example about when to go to war, when to meet foreign envoys, or when to start the agrarian cycle to achieve the most favourable outcome. In the reign of the late sixteenth-century king, Naresuan, astrologers were asked on numerous occasions to decide most propitious moments to prepare the Siamese army for battle against the Mon ruler at Pegu. They also interpreted the king’s dreams. Astrologers were close to power and because of their expertise provided advice as valuable as that of a minister of state. Thai towns and cities had horoscopes, their respective futures readable in the conjunction of heavenly bodies. Astrology required accurate time-keeping and calendar systems, and for that reason was a science indispensable to maintaining historical records. Nowadays, such manuscripts can be very useful in the determination of approximate or correct dates of historical events. The fully digitised manuscript can be viewed online on the British Library’s Digitised Manuscripts page.

Many manuscripts are characterized by drawings of sacred or magic diagrams (yantra) and formulas, which usually could only be produced, read and interpreted by a ritual specialist or a monk who had been trained in this unique knowledge. The historical role of magic and protective diagrams and formula is described in the Thai epic narrative Khun Chang Khun Phaen, for example. It is assumed that magic was mostly used as a protective measure and as a means to improve individual or communal fortune and merit, but it could also serve the aim to disempower real or perceived enemies. The fully digitised manuscript is available online from the website of the Princess Maha Chakri Sirindhorn Anthropology Centre. 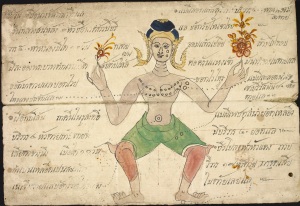 Medicine (phaetsāt) manual from Central Thailand detailing tumours and their prospects for treatment; 19th century folding book held at the British Library (Or. 14114)

In its most sophisticated written form Thai medical knowledge was preserved by court physicians who guarded it jealously to keep it from other practitioners. But medical knowledge preserved at the court paralleled and mutually informed a body of local medical knowledge transmitted in the countryside. This medical knowledge should not be regarded as a uniform system of medicine, although the cultural dominance of the court and the practice of writing it down and making it known to Western visitors might lead historians to think otherwise. Regional differences in language, tradition, environment, and differing concepts of well-being meant that there were marked variations in the way illnesses and their treatments were classified in different parts of Thailand. Medical manuscripts often contain illustrations representing the Thai understanding of human anatomy and a wide range of tumours and diseases like the example shown above; others explain methods for childbirth, treatment of different diseases or the use of herbal remedies; and some illustrate methods for massage and acupressure. The manuscript shown above is available online from the British Library.

Among Thai animal treatises, those on elephants are the most remarkable. According to traditional belief, elephants – most especially white elephants – symbolised merit, power and wisdom. White elephants had a semi-divine status and were revered as a powerful symbol of the king’s strength and the prosperity of the kingdom. In Thai mythology, certain elephants were thought to have magical powers, like the 33-headed Erawan elephant. A three-headed white elephant served as a royal symbol in several Thai and Lao kingdoms on flags and state emblems. Also, practically, elephants played an important role in warfare.

In Thai manuscripts, sacred elephants in the Buddhist context are preferably shown in bright colours (white, light-yellow, golden, light-grey or pink to red), but also real elephants are shown as they appear in nature (grey to dark-grey, some with bright pink patches of skin). Some manuscripts describe real elephants in their natural appearance with advice on their character and whether or not to keep them. Similar manuscripts exist for cats, horses, birds and dogs. The elephant treatise above is available online from the British Library.

Thai poetry flourished during the period of King Narai’s reign (1656-1688) as the king was a poet of great merit himself. Poetry and prosody books served as primers and standard textbooks for teaching reading and writing to children and youths well into the Rattanakosin era (19th century). Traditionally, epic narratives and dramas were written in verse form, but poetry also served to praise the Lord Buddha, to honour meritorious people, or to celebrate the beauty of nature and landscapes. Sometimes poems were arranged like a secret code so that only a person who knew the key was able to understand the poem. The manuscript shown above contains a number of beautifully illustrated poems together with poems arranged in diagrams in honour of a beloved lady. The fully digitised manuscript is available online from the Bavarian State Library via the World Digital Library.